(This is an article by Marit Stinus-Remonde published last 4th of April..here's the link)
(Pics: The Ambassadors last 21st of April at Handuraw Cafe)
Junior Kilat’s Ako si M16, FM radio station NU107’s 2005 Song of the Year, reflects the growing popularity of the use of Cebuano in contemporary alternative music. Visayan bands with an ambition to reach a nationwide audience make albums in English or Tagalog. Urbandub, Sheila & The Insects, The Ambassadors and Cueshé are examples of Visayan rock bands that have gained national fame and didn’t release Visayan or Cebuano language singles.

Cebuano is the language in which Cebuanos speak, work, think, quarrel and dream. You hear it all around you if you are in a Cebuano-speaking area. Nothing would be more natural than to hear Cebuano in the songs played on radio. As Ms. Marie Denise Cristobal, a second-year student of the University of San Carlos, puts it: The airing of Cebuano language rock songs “has added color to ordinary radio listening.” This music is known as Bisaya Rock or Bisrock.

In the past only few rock bands went against the current and did Cebuano language albums and songs. Today, however, the trend has been reversed and Cebuano lyrics have become the “X factor” that gives a local band an edge over other bands—including Manila’s top bands, as far as the Cebuano rock audience is concerned. The Ambassadors’ album Simple Changes includes one song in Cebuano. The song Ulipon is, however, only a hidden track attached after one of the album’s regular songs. You have to scan carefully the small print on the cover to find the title of the song. Yet Ulipon has become the band’s most popular song in Cebu, the song that concert-goers wait for and sing along with.

There has been a virtual wave of Bisrock songs and bands in recent months despite the fact that few local radio stations allocate significant airtime to the Cebuano rock songs. Yet, according to Ms. Cristobal’s study of the Bisrock phenomenon, 87 percent of the students she surveyed are familiar with it. While only 64 percent of the total survey group actually like the genre, 75 percent are proud of the Bisrock artists and bands. Ms. Cristobal writes in her introduction to the study that “I am very proud of our Bisaya artists. This study I am conducting is, first and foremost, my expression of support for their efforts to promote the Cebuano-Visayan dialect.”

The songs are not only liked because of their being in Cebuano. The most popular of the Bisrock bands—Aggressive Audio, Ambassadors, Blood of the Stone, Gangrene, Indephums, Jimmycycle, Mantequilla, Missing Filemon, Phylum and Timeslot—compose songs with lyrics that Ms. Itns 500 software. Cristobal’s survey group found to be “a good mix of social and political awareness, humor and romance.” A review of Missing Filemon’s album Sinesine sums up the unique effect of Bisrock: “The new songs have a subtle way of serenading the eardrums, re-arranging the brain and waking up the Bisaya in you.” (The Freeman, February 24, 2006).

Most Bisrock bands started by doing cover versions but they owe their fame in the Cebu music scene to their original compositions. For some band members, writing the songs was a way out of personal problems and frustrations. In an age where the instant gratification provided by materialism and illegal drugs has become the preferred escape valve and pastime of the depressed, the heartbroken and the bored, it is encouraging beyond compare that some young Visayans have ventured down a road less traveled by creating their own brand of music, a brand never tried or tested before.

I went to a concert and was surprised to hear the crowd sing along the Cebuano songs despite the fact that the songs are new and few radio stations play them. Obviously, the Bisaya in the Cebuanos have been awakened but not in a parochial sense. Rather, the music reflects a will and courage to be true to our free and unique selves without fear of going against convention.

*********
Handuraw Cafe was actually jampacked with bisrock fanatics that the place became too small for all the participants. Great performances by Urbandub, Still Techisoba and OneManDown. I don't really like Anino. I can't relate to their friggin' songs. eod.. 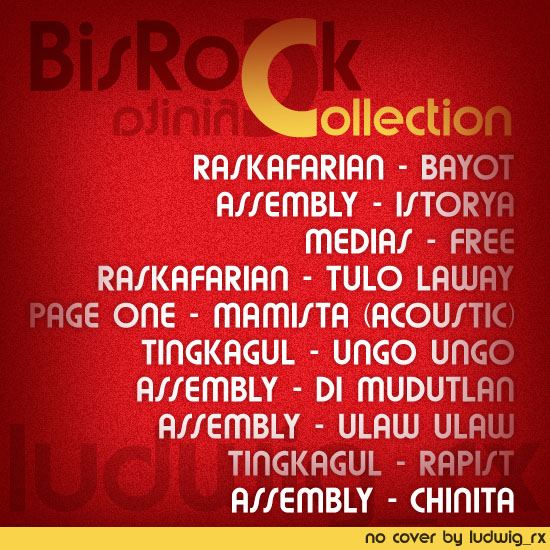 steer clear of the path on which others stepped
REPEAT CHORUS