Chlorine atom'>Atoms are the basic building blocks of everything around us. They come in different kinds, called elements, but each atom shares certain characteristics in common. All atoms have a dense central core called the atomic nucleus. Forming the nucleus are two kinds of particles: protons, which have a positive electrical charge, and neutrons, which have no charge. All atoms have at least one proton in their core, and the number of protons determines which kind of element an atom is. For example, an oxygen atom has 8 protons. If you were somehow able to change the proton number of this atom to 7, even if everything else remained the same, it would no longer be an oxygen atom, it would be nitrogen. For this reason, we list the different elements by their proton, or atomic, number. The periodic table of elements is a chart of all of the elements that have been discovered so far, in order by their atomic number.

In addition to protons and neutrons, all atoms have electrons, negatively charged particles that move around in the space surrounding the positively-charged nuclear core. Electrons are usually depicted in drawings as much smaller than protons or neutrons because their mass is so much smaller. In fact, electron mass is so small that it is not counted in an atom’s mass. However, the charge strength of a single electron is equal to that of a single proton, and despite their small mass, electrons are important for balancing the charge of an atom. Unless specifically stated otherwise, atoms always have the same number of electrons as protons; therefore, you can find the electron number by looking at the atomic number. But unlike protons, the number of electrons can and does change without affecting the kind of element an atom is!

We now know how to find the number of protons and the number of electrons for a given atom, but what about neutrons? How many neutrons do atoms of a given element have? It is NOT always the same as the number of protons and electrons. For example, hydrogen has one proton and one electron, but it doesn’t have any neutrons at all! We determine this by looking at the atomic mass. Even though an atom is so small it would take almost a million for you to see even a tiny dot on your computer screen, each tiny atom definitely has mass and occupies space. This mass comes from the nucleus. Each proton and neutron has about the same amount of mass, measured in daltons, or atomic mass units (amus). Because the unit of measure is defined by one proton, 1 proton = 1 neutron = 1 dalton = 1 amu. Electrons do have some mass, but it is almost 2000 times less than the mass of a proton. There aren’t enough electrons in any of the atoms we know about to affect the total mass; therefore, the total mass is equal to the sum of the protons and the neutrons in an atom.

When the number of neutrons is different for individual atoms of the same element, each atom is called an isotope. When you read a periodic table, the atomic mass listed is the average atomic mass for all of the isotopes of that element found in nature. For example, carbon has an atomic mass of 12.01 in the periodic table. Carbon can’t have 6.01 neutrons because you can’t have part of a neutron. The value exceeds 6 because, while most carbon atoms have 6 neutrons, some carbon atoms are found with 7 neutrons and others with 8 neutrons. For our purposes, we round the atomic mass to the nearest whole number to calculate the number of neutrons.

This video illustrates how atoms and their components work together.

Now that you’ve had a chance to work with atoms in general, let’s dig a little deeper. Electrons remain in an atom because of their attraction to the protons’ positive charge, but they are not as tightly associated with the atom as either protons or neutrons. Electrons are complicated particles because they have a lot of space to occupy in an atom, and yet they are also tied to a specific area within that atom. Although the drawings we have been working with show the nucleus as a medium-sized, visible object in the center of an atom, it is actually very tiny, and most of an atom is the space around the nucleus in which the electrons move.

Because of their shared negative charge, electrons repel one another if they get too close. At the same time, electrons are attracted to the positive charge of the nucleus. The details of the energy and position of electrons can get really complicated, but we will focus only on what we need to understand to study the molecules of life. 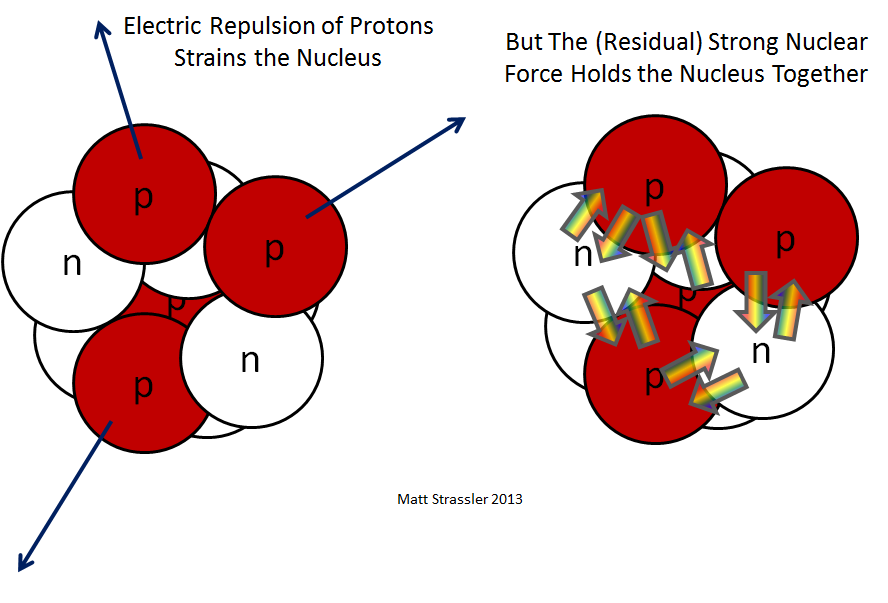 Sulfur atom'>Electrons are arranged in energy shells (also known as electron shells) around the atomic nucleus. Although electrons have plenty of space, they all want to be closest to the positive nuclear charge that is attracting them. At the same time, the electrons repel one another because of their negative charge, and only a few can get close to the nucleus at any given time. Practically speaking, only two electrons can fit in the three-dimensional space closest to the nucleus. This space is called the first energy shell. If there are three electrons in an atom, the first two will be found in the first energy shell. The third electron will have to settle for the second energy shell, a three-dimensional space a little farther from the nucleus, where it will be alone. In this example, the lone electron is called a valence electron, and the outermost energy shell that contains any electrons is called the valence shell.

When an energy shell is incompletely filled, the electron(s) in that shell are not as stable and are more likely to react. For this reason, atoms tend to react with other atoms in ways that will fill or empty their valence shell to gain the stability of a full outermost energy shell. Atoms can do this by gaining or losing electrons to become ions or by sharing electrons with other atoms to form stable associations.

Using electron number and energy shells, we can determine the number of valence electrons for any given atom and its expected level of reactivity. As you work with the example below, you should remember that although we draw energy shells as circles around an atomic nucleus, this is not meant to represent an actual electron path. The concentric circle style of drawing energy shells is meant to represent the average distance electrons in that energy shell are orbiting the nucleus. In reality, electrons do not move in a circular orbit as depicted in the drawing, but travel much more complicated pathways around an atomic nucleus.

Use this activity to practice reading the periodic table to create several atoms.

What is the Valence?

In this activity, you will calculate the number of valence electrons in atoms using the periodic table of elements.